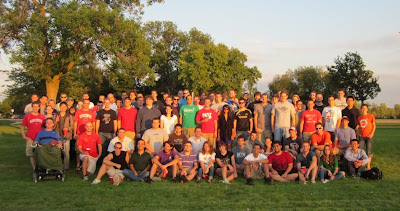 With the start of another fall semester came another highly successful Pic-Nuke. In total we cooked up 30 lbs of ground beef, 18 lbs of chicken, and 20 lbs of bratwurst, and devoured almost all of it by night's end. A new addition to Pic-Nuke this year was the Toothpick Tower Contest where teams of nukes were given mini marshmallows and toothpicks with the goal of building the tallest free-standing tower in a limited time period. The winners this year were Sam Maslonkowski and Dave Ozburn, seen below with their winning tower and victory swag (the shiny yellow coffee mugs): 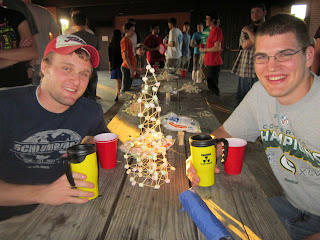 In addition to the magnificent food, beverages, music, and the tower building contest, we also managed to get all the beautiful nukes together for a group photo, seen above. (Let's be honest, are there any nukes who aren't beautiful? I think not.)

With the fun of bowling night and Pic-Nuke behind us, there is some more serious ANS business coming up next week to accompany the engineering career fair (which no one forgot about, right?). ANS has three recruiters giving talks specifically to ANS next week. Eric Edwards from Knolls Atomic Power Laboratory will be speaking at 5:30 on Tuesday, 9/20 in 1610 E-hall. Thomas Steele from Idaho National Labs will be presenting at 12:30PM in 106ERB on Thursday, 9/22. Lastly, Amy Lapse from Sandia National Labs will be in 1610 E-hall at 5:30PM on Thursday, 9/22 as well. Be sure to stop by if your interested in any of these potential employers to meet them in a much more personal setting than the chaos of the career fair. And a reminder, these events and all other upcoming ANS events can be found on the calendar here.
Posted by The Atomic Badger at 8:55 PM